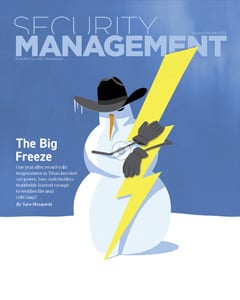 Texas is no stranger to extreme weather, including intense heat and record-breaking hurricanes. According to the U.S. Energy Information Administration (EIA), electricity generation usually peaks in Texas during the summer. The annual spike is triggered by residents firing up air conditioners in search of some respite from rising heat—in some areas of Texas, temperatures reached 116 degrees Fahrenheit in 2020.

But in February 2021, a seemingly singular strain on Texas’s power grid occurred. With a polar jet stream and polar vortex generating winter storms, Texan grid operators faced an unusual surge in demand for midwinter power—one they were not prepared for.

Also In This Issue

January 2022 Industry News January/February 2022 Marketplace Certification Profile: Julio Marval, CPP, PCI, PSP Book Review: Strategic Leadership in Digital Evidence Book Review: Anti-American Terrorism: From Eisenhower to Trump – A Chronicle of the Threat and Response
As crises continue to rise, communities are coming together to craft crisis intervention teams and programs to address them in a more holistic manner.
A California school district increased video storage capacity for greater peace of mind throughout its schools and facilities, using video management for troubles great and small.
After a school violence incident, parent/student reunification is the last step in response. It is also the first step in recovery.
One fake coupon may seem like small potatoes to a retailer or manufacturer, but fraudsters are operating in bulk.
The U.S. Supreme Court upheld qualified immunity for four police officers, protecting them from liability in suits that alleged excessive force.
Ransomware continues to thrive as organizations increasingly rely on remote workforces. Security practitioners are struggling to keep abreast of the threat as criminals change their tactics to ensure ransoms are paid.
The role of a security guard is frequently undermined by a variety of factors, including the absence of procedures, low morale, competing demands and contradictory expectations, and poor management.
As the calendar flips to 2022, ASIS welcomes a new collection of security leaders to its global leadership structure, including global and two regional boards.
In a significant number of school incident after-action reports, communication is called out as a failure point in the response. In nearly all, communication is noted as an area for improvement.
More than 42 million Americans quit a job in 2019. But in just the first nine months of 2021, resignation levels were more than 10 percent higher than the record-setting 2019.
Space junk and weather—you might think they’re threats too mundane to manage…. until they break a window on your space station.

Security Management thanks our advertisers for making this issue possible. Learn more about our magazine sponsors here.