Killers of the Flower Moon: The Osage Murders and the Birth of the FBI. By David Grann. Vintage; doubleday.com; 400 pages; $16.95. 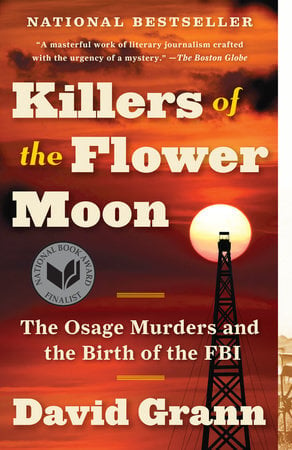 Author David Grann takes readers back to 1921 and the lands of the Osage Nation. It was a time when the Osage gained notoriety as the wealthiest people on earth following discovery of oil under their land. Killers of the Flower Moon describes a series of murders investigated haphazardly by various law enforcement personalities until a young J. Edgar Hoover—barely 30 years old—sends a former Texas Ranger turned Bureau of Investigation agent to take the lead. Readers join Special Agent Tom White as he uncovers a conspiracy—a culture of killing—that exploited an outdated guardianship system prohibiting Native Americans from administering their own wealth.

White’s team drives the investigation to solution, identifying the killers and then supporting their prosecution. Yet Grann proposes that many murders in the Osage Nation went unsolved. During the course of his research, he discovered convincing evidence of multiple conspiracies and proposes that the Osage killings began as early as 1918 and continued through 1931. It is important to remember that during the 1920s the Bureau of Investigation and its aspiring leader, J. Edgar Hoover, were still developing and maturing.

Finally, Killers highlights Hoover’s ability to capture headlines. Following incarceration of the main conspirators in 1926, Hoover used the Osage Reign of Terror as a showcase to ensure Congressional funding and growth of his infant Bureau into a multifaceted federal law enforcement agency, today’s FBI.

The author’s research into the Osage Reign of Terror of 1921–1926 is exhaustive. He complements this with excellent writing that pulls the reader in from beginning to end. The single criticism to be offered of Killers of the Flower Moon is the exclusion of an index. The significant amount of information and detail would benefit from a place to refer as the story unfolds and names and places reappear throughout the narrative.

[Recommended Reading: Keep Ahead of Crises by Planning for Complex Scenarios]

Besides its value as a historical narrative, the book is a primer for how to treat—and not treat—a crime scene. Forensics had not yet become an indispensable tool for crime fighting. Readers join FBI agents during crucial interviews and learn to watch for telltale signs of deception, innocence, and guilt.

The subtitle, The Osage Murders and the Birth of the FBI, suggests the investigation was the first for the new Bureau of Investigation, established in 1908 and renamed the Federal Bureau of Investigation (FBI) in 1935, but the beginnings of the country’s new Bureau include other notable cases: the Red Scare and Palmer Raids of 1919 and 1920, which culminated in a congressional inquiry; and the successful probe of 1932’s kidnapping and murder of Charles Lindbergh’s 20-month-old son, the first designated major case of the FBI and the case that was responsible for spawning the FBI’s storied forensic laboratory.