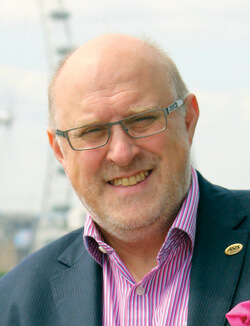 In 2018, Mike Hurst had built a successful career in the security profession. He had more than 30 years’ experience working in security. He’d been an ASIS member for 20 years and had carved out a role for himself in ASIS volunteer leadership—serving as vice chair of the ASIS United Kingdom Chapter for almost 10 years.

What he didn’t have was an ASIS certification.

“In my volunteer roles with ASIS, I’d promoted certification for so long and seen firsthand the impact certification has on security professionals’ careers,” he shares. “It was about time that I took the plunge and pursued one myself.”

Hurst began his career as a stockbroker before pivoting into a sales and general management role in the realm of fire and security. Becoming more entrenched in that world, he decided to join recruitment consultancy company HJA Fire and Security in 1992.

In 1998, a job candidate he had placed into a senior security position recommended that Hurst join ASIS International. As a recruitment professional, the candidate claimed, Hurst stood to benefit from the top-notch ASIS network of security professionals.

While he joined for the networking, he shortly discovered the wide range of benefits ASIS offers its members—including education and professional development.

In the ensuing years, Hurst became director of HJA. While his own expertise in security increased, the number of services the company offers grew as well. In addition to executive security and fire recruitment, the newly rebranded HJA Consult now specializes in strategic consultancy, enterprise security risk management (ESRM) advocacy, and event management.

Hurst took on volunteer roles with the ASIS UK Chapter’s newsletter and website before stepping up as chapter vice chair in 2010. He also sat on the ASIS European Advisory Council and now serves on the ASIS Professional Development Council and as a project leader for ASIS’s global ESRM communications efforts.

When he decided it was time to become certified, Hurst set his sights on the Certified Protection Professional (CPP©) designation—the gold standard of security certification.

Since passing the CPP exam in 2018, he notes two major benefits of attaining certification. “The material that I reviewed in preparing for the exam has given me a greater understanding of security management,” he explains, “and as such has made my conversations with clients more meaningful and useful. It has also greatly increased my profile and my regard in the profession, globally.”

He offers a simple three-step plan for preparing for an ASIS certification exam:

1. Make sure you meet the criteria for the certification you are interested in.

2. Select the learning style that best suits you. ASIS offers online review courses and reference materials for self-study. Many chapters offer classroom courses for collaborative group learning. Find what works best for you.

“Security is a diverse profession,” says Hurst. “ASIS and its certifications help illuminate the pathways to an interesting and fulfilling career.”