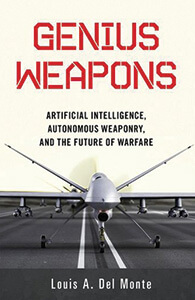 The concept of autonomous weapons is not new. They have been developed to reduce costs, error, and manpower, while increasing lethality and efficiency. Genius Weapons: Artificial Intelligence, Autonomous Weaponry, and the Future of Warfare is a study of such weapons, as well as of artificial intelligence and the future of warfare.

Author Louis Del Monte does a fantastic job of explaining what autonomous weapons are and their history. He points out that some weapons are already on the cusp of acting alone. Were it not for the perceived need for humans to be able to exert a modicum of control in case the weapon were to go awry, systems such as these would be able to act independently in a given situation.

The author explores what artificial intelligence (AI) and its components—robots, cyborg-humans, and the like—will be capable of. Will AI have morality? Intuition? See humans as a threat and seek to exterminate them? Del Monte tries to answer these and other questions through hypothetical scenarios and speculation. However, he frequently ends up contradicting himself because he cannot possibly know. The hope is that AI would bring about improvements in life, but there is the possibility that AI could take over life as we know it and create a world AI wants rather than one humans would prefer.

Where the work really shines is in its attention to the details of what is already known about AI, which is incredibly interesting, enlightening, and informative. It explains known capabilities of friend and enemy alike, plus how future warfare may occur. One shortfall is that the author occasionally goes off message; for example, he speculates that AI may one day replace doctors.

This reviewer found the work at times fascinating, and at other times humorous. Aside from some of its more fanciful aspects, it is a worthy read for anyone who wants to learn more about AI and its use in weaponry. In these areas the author is concise, seamlessly taking the reader from one subject to the next. This allows readers to formulate their own conclusions about the possible future of AI, yet still comprehend how Del Monte came to his.

Reviewer: William F. Eardley IV, M.L.S. (Master of Liberal Studies), has more than 30 years of experience in security and corrections. He is a member of ASIS International.