While it has been a summer filled with civil unrest in the United States sparked by incidents in which police killed or acted with excessive force against minorities, it’s important to remember that the Black Lives Matter movement started in 2014 after George Zimmerman was acquitted of the murder of Trayvon Martin. Society did not remain dormant in the intervening years, and one of the solutions put into practice in many jurisdictions was implicit bias training for police forces.

In 2018, New York City, for example, entered a $4.5 million contract to train New York Police Department personnel to understand implicit bias and how it affects the decisions they make.

Given the continued issues, it’s fair to ask the question: Does implicit bias training make any difference? Researchers from the John F. Finn Institute set out to answer that question, using the NYPD as its test case, and they just released a report, The Impacts of Implicit Bias Awareness Training in the NYPD. Spoiler alert: the study indicates somewhat mixed results, and is ultimately inconclusive on whether the training effectively reduces biased police action.

Fair and Impartial Policing is the company hired by the NYPD, and is a leader in law enforcement implicit bias awareness training with clients across the country. The organization’s website explains that patrol officer training is designed to help attendees:

An article written in 2017 by Tom James for The Atlantic was one of the early journalistic examinations of the trainings. James described the goal of implicit bias trainings this way:

At their root, the trainings spring from one basic proposition: that unconscious biases—including those linked to factors like economic class and gender, but especially racial biases—are the inevitable product of growing up in a society where stereotypes are woven into the fabric of everyday life. … Crucially, what makes implicit biases implicit—and important—is the fact that they can exist despite people’s best intentions. Over and over, researchers have found that subjects can consciously embrace ideas of fairness and equality and yet, on tests that measure subconscious tendencies, still show a strong propensity to lean on stereotypes. … The trainers told me their goals can be boiled down to one hope: that by showing officers evidence of the existence of bias, and by encouraging them to discuss their own, seeds of self-awareness will ultimately grow—and change behaviors on the street.

For example, prior to training, 44 percent either strongly agreed or somewhat agreed with the statement: “Implicit biases can affect even individuals who consciously reject prejudices and stereotypes.” After training, those agreeing increased to 63 percent. 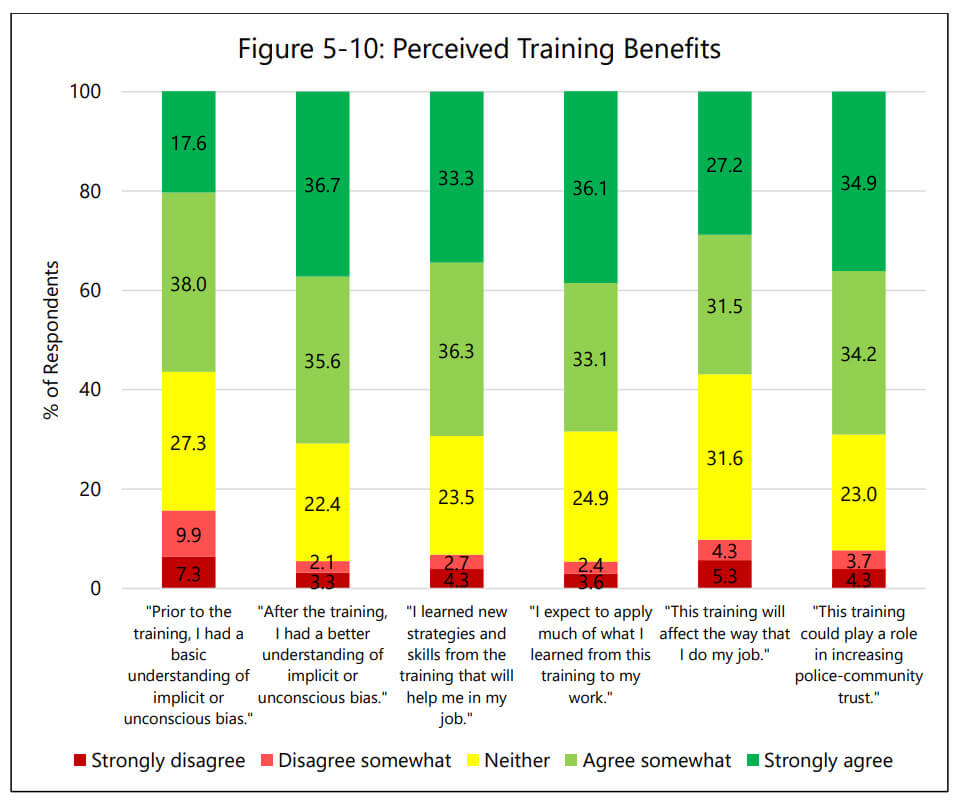 Despite the lack of noticeable change in police activity, the researchers were careful not to conclude that the training had been unsuccessful.

“It is very difficult to isolate the effects of the training from other forces that produce disparate enforcement outcomes," they wrote. "Training impacts might be a signal that is easily lost in the noise of everyday police work. Estimating the effect of a single training curriculum on officers’ decisions to invoke the law or otherwise exercise police authority may well be akin to finding the proverbial needle in a haystack.”

In an interview with Slate before the study was released, Fair and Impartial Policing CEO Lorie Fridell echoed the difficulty of measuring the last part of the equation.

“It’s very hard to measure the extent to which bias impacts on policing because if we only look at disparity, we cannot conclude that disparity is the same as bias,” she said. “So, when we look at, for instance, any agency, and look at use of force stats, arrest stats for robbery, stop and search, we’re going to find that people of color are disproportionately represented in those groups. That disproportionality could be due to several factors. Most notably it could be due to bias on the part of police, but it also could be due to differential criminal behavior or resistance behavior on the part of demographic groups, and we can go there if you want to. But it’s very hard to measure.”

Despite the difficulty in measuring, later in the interview she expressed her belief that the trainings are both beneficial and important.

“I do think that implicit bias training works, but we have to put it in context. I think a lot of the criticism that we’re getting of late is due to frustrations around society, that we’ve been working on implicit bias training, and deescalation training, and use of force reforms and hey, we still have problems," Fridell said. "There are going to be people with implicit biases who are made aware of them and because they want to do the right thing, that will give them motivation to implement the skills. Of course, I actually think that that’s most cops, that they want to do the right thing, but obviously that’s not all of the cops. … No one should believe that just bringing in trainings is going to turn the agency around. I’m so glad that we’re not just talking about the biases and racists in policing; we are talking about society because that’s where we get these cops. So unless we’re talking about long-term change in society, this is not a quick fix.”

Sustainability in the Security Industry: Everyone Has a Role to Play