Gallup’s State of the Global Workplace 2022 Report is a lesson in dichotomies. Workers in the United States and Canada are the most engaged in their work in the world, and the countries earned Gallup’s description as the best region in the world to be an employee. However, workers in these countries are also among those who feel the highest amount of work stress.

In Europe, on the other hand, workers are highly dissatisfied and disengaged at work. The finding is surprising since another study based on Gallup research, The World Happiness Report, found that the top eight happiest countries in the world are all in Europe.

To describe the overall state of work around the world, Gallup CEO Jon Clifton busts out the old joke from comedian George Carlin: “Oh, you hate your job? Why didn’t you say so? There’s a support group for that. It’s called EVERYBODY, and they meet at the bar.”

Overall, Gallup found that 60 percent of people are emotionally detached at work and nearly one in five (19 percent) are miserable.

In worldwide trends, Gallup asked workers if they experienced stress, worry, anger, or sadness at work yesterday. The tracking lines for worry, anger, and sadness all dropped slightly from last year’s pandemic-influenced highs, but they were still higher than every other year since the study started in 2009. Stress, however, continued its climb, jumping to 44 percent, compared to 43 percent last year and the five previous years when it hovered between 39 percent and 37 percent. 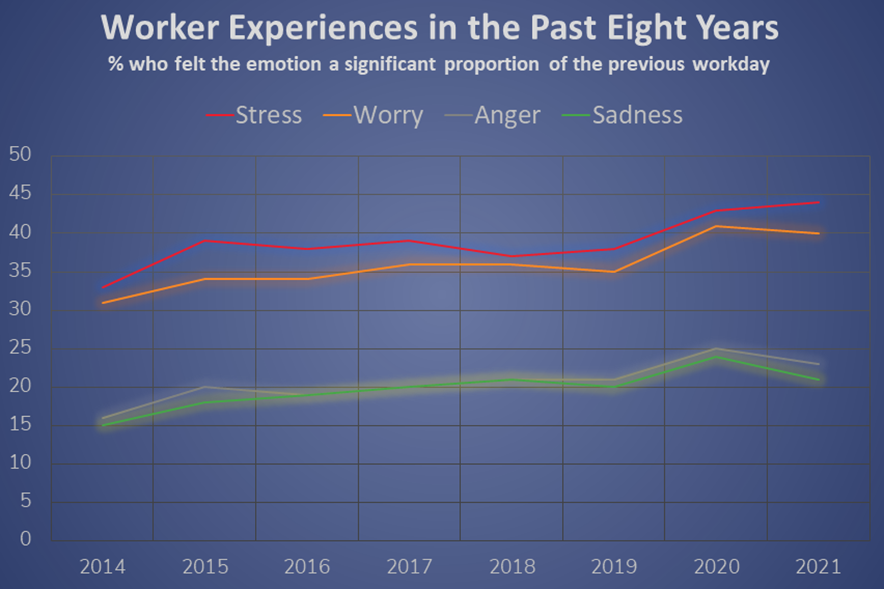 Source: Derived from graph in State of the Global Workplace 2022 Report by Gallup. See report for full data.

Having the highest level of engagement is only one of several reasons Gallup described the United States and Canada as the best region in the world to be an employee. In addition, the region was tops in workers being able to live comfortably on their income (approximately half or workers) and in workers who said it was a good time to be looking for a job (the region shot up 44 percent from a pandemic-influenced low the previous year). The region was also second, behind Australia and New Zealand, in Gallup’s life evaluation calculation, in which employees were asked about their overall contentment, both now and projected into the future.

However, the number of workers reporting that they felt a lot of stress the previous day at work was 50 percent in the United States and Canada, compared to a worldwide average of 44 percent.

In Europe, 37 percent answered yes to the daily stress question, and the region’s workers were below the worldwide average in daily worry, anger, and sadness, too. Stress and the other indicators are generally linked to engagement, but Europe breaks that trend. Why?

Gallup proposed that worker engagement is most closely related to worker expectations about the workplace, including making connections and feeling support from a team and of finding purpose in work. “Some critics might argue that there is no problem. Europe has some of the world's most successful companies—who needs employee engagement,” Gallup said in its European analysis. “But Gallup's analyses of engagement in Europe have found across industries that engaged teams in Europe are significantly more productive and profitable than disengaged ones. Many European companies are leaving wealth and innovation on the table, while their competitors are winning on talent and productivity.”

The bottom line, Gallup proposed, is that the numbers show poor leadership and people management. And we know that dissatisfied or unfulfilled workers is a primary source of workplace violence and a major contributor to insider threats.

Gallup did not just have harsh things to say about Europe. In a preliminary analysis piece earlier this month, Clifton wrote, “Improving life at work isn't rocket science, but the world is closer to colonizing Mars than it is to fixing the world's broken workplaces. … The real fix is this simple: better leaders in the workplace. Managers need to be better listeners, coaches, and collaborators. Great managers help colleagues learn and grow, recognize their colleagues for doing great work, and make them truly feel cared about. In environments like this, workers thrive.”

In addition to the potential negative security consequences for the organization, security leaders should also take the message to heart and understand many security teams are likely experiencing negative workplace emotions and experiences. The same solution Clifton proposes for the business world at large goes for security leaders: work hard to ensure you are the best manager and leader you can be for your security team. 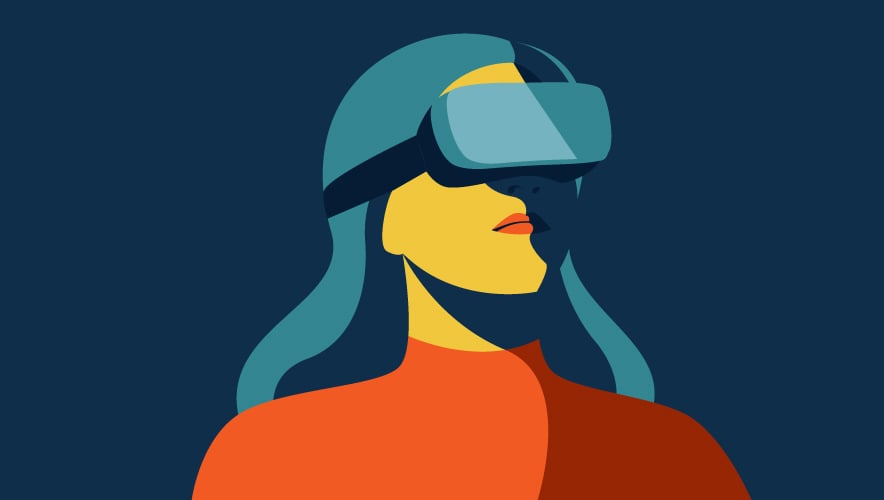