Book Review: The Birth of the FBI 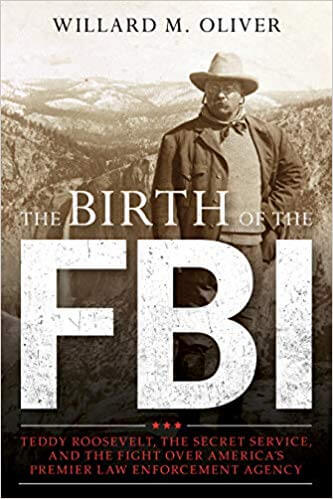 Meticulously researched, The Birth of the FBI: Teddy Roosevelt, The Secret Service, and the Fight Over America’s Premier Law Enforcement Agency is a fast-paced, engaging narrative that describes the origins of U.S. federal law enforcement.

Author Willard M. Oliver begins with the very early days of law enforcement in the new United States of America. Having vanquished England and its army, the infant United States was wary of creating police forces, particularly at the national level. Federal law enforcement came slowly as the country matured.

Oliver describes the first U.S. marshals, who served process paper and administered court affairs. In 1865, the government formed the U.S. Secret Service to stamp out an epidemic of counterfeit currency; eventually it added protection of the president to its mission.

The Secret Service remained the primary federal investigative law enforcement agency through the turn of the 20th century, when its mission expanded to assist other government agencies. This is where the book delivers its detailed discussion of the causes underlying the creation of an investigative arm of the Department of Justice—the Bureau of Investigation, which was renamed the Federal Bureau of Investigation in 1935.

The author takes readers back to the early 1900s and Theodore Roosevelt’s tenure as the 26th president of the United States. Roosevelt championed conservation of the nation’s natural resources and fought corruption in government. These positions put him at odds with many of the country’s wealthy and influential individuals, who were profiting from the Homestead Act of 1862—an act designed to transfer government lands to private citizens for homesteading.

Rather than creating more family farms, the country’s plains and forests were being diverted to lumber and mining companies for handsome profits. The schemes became rampant, overwhelming government investigators, and led to the temporary transfer of Secret Service agents to assist. The Secret Service agents’ efforts bore fruit and resulted in multiple indictments during 1904–1905 for collusion in land fraud; among them were a U.S. senator, two U.S. representatives, and a U.S. attorney.

The trials that followed enraged Congress; legislators viewed the Secret Service as investigating their private lives, covertly watching their every move. The U.S. House Committee on Appropriations retaliated by hamstringing the Service—prohibiting Secret Service funds to be used for anything other than its original mission.

President Roosevelt acted when Congress took a summer recess. In July 1908, he directed the U.S. attorney general to issue an Executive Order creating an investigative arm within the Department of Justice.

Oliver describes the battles between Roosevelt and Congress over whether use of Secret Service operatives to investigate land fraud crossed legal guidelines, all while keeping the new detective force out of the public eye. Eight top Secret Service agents resigned and were rehired as the first Bureau of Investigation agents.

The political acumen of President Theodore Roosevelt is showcased throughout the book. He favored camaraderie with members of the press—unlike today’s contentious relations—and skillfully used that rapport to gain the American public’s trust and buy-in for his eight-year agenda of natural resource conservation and anti-corruption.