Do you feel safe in the world today? How about compared to in 2019? Or five years ago? In 2021, 34 percent of people worldwide said they felt less safe than they did five years previously, compared with 30 percent in 2019, according to the World Risk Poll from Lloyd’s Register Foundation and Gallup.

This difference in perceived safety is most markedly seen in regions with political instability, including Afghanistan (82 percent of people felt less safe in 2021 than they did in 2016), Lebanon (84 percent), Myanmar (59 percent), Nigeria (61 percent), and Venezuela (69 percent). 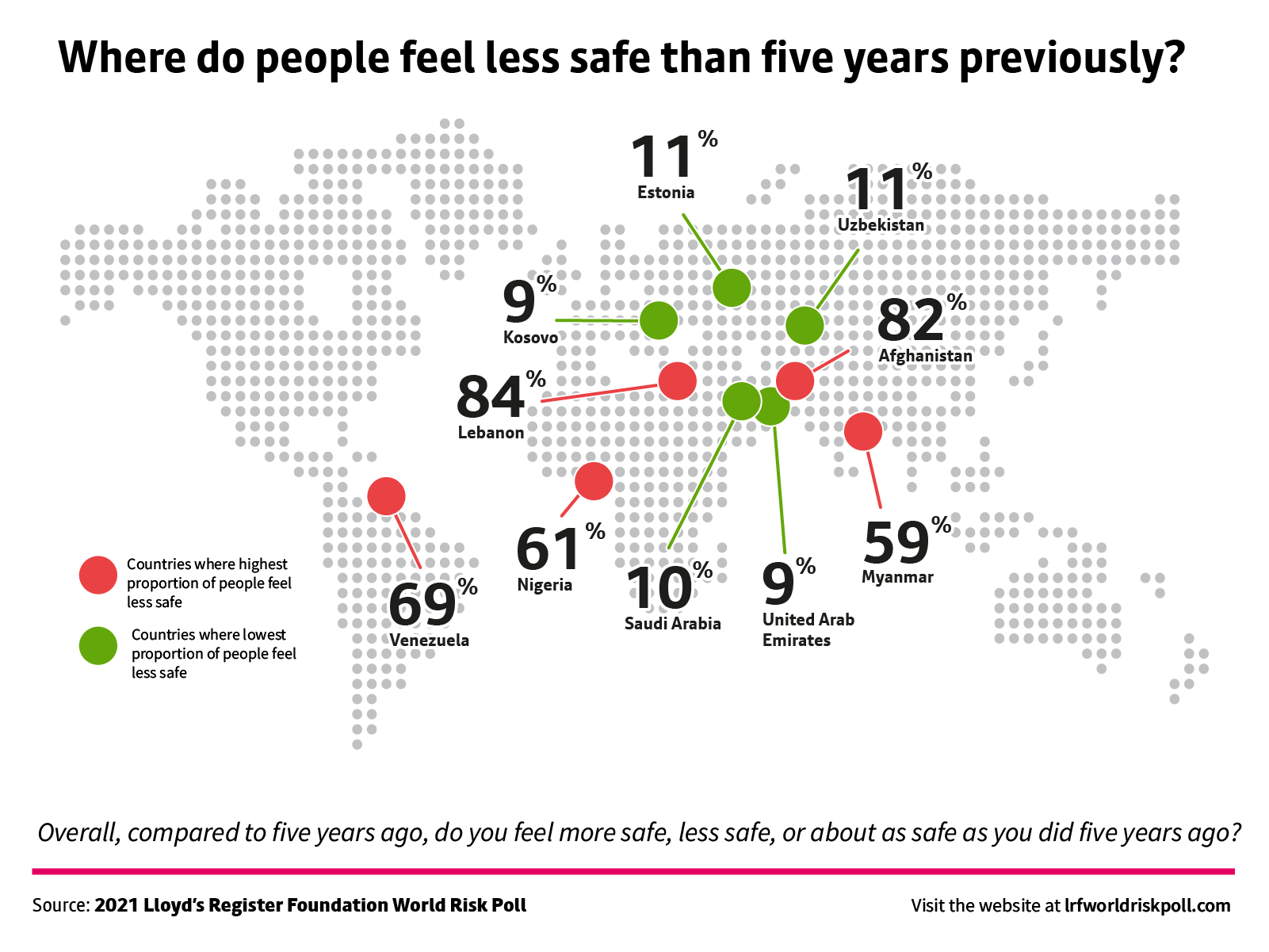 Despite the COVID-19 pandemic’s sweeping effect on the world stage, though, only 7 percent of people said the disease was the top source of risk in their daily lives. Instead, people focused on ongoing safety threats—especially in regions with widespread poverty and instability—and high-impact (albeit less likely) risks.

“The World Risk Poll results provide us with valuable insight about people’s perceptions and experiences of risk, and while we can look at the results for different risks individually, it is important to consider how they may be linked,” said Dr. Sarah Cumbers, director of evidence and insight for Lloyd’s Register Foundation. “For example, worry about crime and violence could be having a major impact on an individual’s mental health, as could the economic consequences of a global pandemic. Policymakers must consider every part of the data when working with communities to help them navigate risk.”

Topping the global list of perceived threats were road crashes and violence risks. People were asked to name in their own words the biggest risk to their personal safety—13 percent said road crashes, and 12 percent said crime and violence. In high-income regions (especially in northern Europe and Australia/New Zealand), road crashes were the most named threat, but violent crime is the top concern in Latin America and Southern Africa, named by more than 40 percent of people.

“While the Poll shows a slight but significant increase in people feeling less safe, it also highlights several contributing factors, including political and socio-economic,” Lloyd’s Register Foundation noted. “The data shows that people who view violence or political instability as their greatest risk were most likely to feel less safe than five years ago. The report also highlights a ‘dread effect,’ where people worry more about the potential threats with more severe consequences, even if they are less likely.”

For instance, at least half of the people who cited war and terrorism, politics and corruption, or crime and violence as their greatest sources of risk said they felt less safe in 2021 than in 2016, “implying a growing sense of dread regarding political instability and governments’ ability to keep people safe,” the report said.

“That’s important to understand—risks are not just statistics,” said Wändi Bruine de Bruin, provost professor of public policy, psychology, and behavioral science at the University of Southern California, in a video introduction to the report. “They are also what we feel about them. So, policymakers can use that to understand what risks people are worried about, even if the risks are not common, so that they can implement policies that make people safe from common risks, but also make people feel safe from the risks that they are really worried about.”

This perception can also exacerbate broad challenges that face entire regions. In Latin America, the report found that 47 percent of people aged 15-29 named crime and violence as the greatest threat to their safety, and 37 percent said they would move permanently to another country if they got the chance—compared to 16 percent globally.

Between 2019 and 2021, people’s experience of harm increased the most worldwide around the areas of mental health and severe weather. 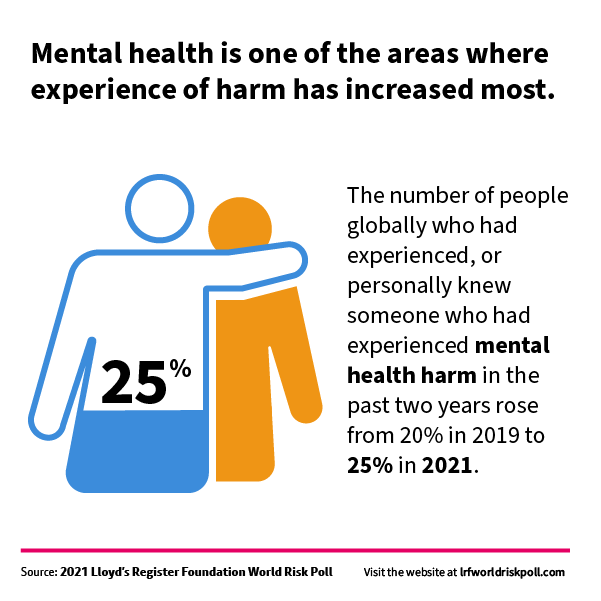 “The rise in mental health issues was seen across regions and nations of different income levels, showing this is not just a ‘western’ problem and must be considered in all global health and development policies,” the report noted.

Climate change is exacerbating these harms, and people who have experienced severe weather events are more aware of the effects and threat of climate change. “This is less true of those with lower levels of education, who are less likely to make the link between severe weather and climate change, despite often suffering the greatest impacts from its consequences,” the report said.

In 2021, 24 percent of people worldwide said they or someone they know had experienced serious harm from the work they did. But only 19 percent worry that they might be harmed at work.

“This gap between people’s perceptions of risk and their experience of risk while at work highlights a safety challenge, as people may underestimate the possibility of being injured in the workplace,” the report noted.

Experience of work-related harm was most common among low-income workers, especially those who have jobs involving physical labor where hazards are more common.