Crisis in the Red Zone: The Story of the Deadliest Ebola Outbreak in History, and of the Outbreaks to Come. By Richard Preston; Random House; penguinrandomhouse.com; 400 pages; $18.99 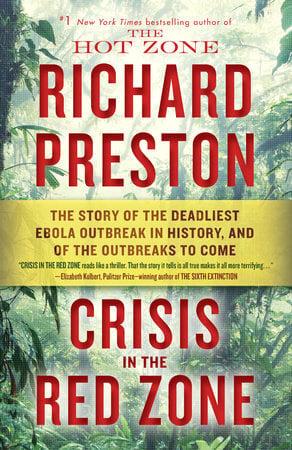 This fourth book in Richard Preston’s Dark Biology series, Crisis in the Red Zone was published in July 2019, before COVID-19 descended on our world. Preston could not have been more prophetic. His vivid descriptions of the course of infection and the medical staff’s struggles to grasp the enormity of Ebola’s rapid and silent spread were harbingers of 2020 as his subtitle warns of the Outbreaks to Come. Indeed, as I write this, deaths in the United States from COVID-19 have topped those in China—the viral point of origin—and President Donald Trump has just extended Americans’ “stay at home” period.

Crisis in the Red Zone describes the Ebola outbreak of 2014, but Preston begins in 1976, the year doctors and scientists in the African Congo first discovered the Ebola virus. He chronicles a highly transmittable and deadly infection, a zoonotic disease capable of animal and human infection. But while the Ebola virus kills its human and nonhuman primate victims at a rate of nearly 50 percent, a nonprimate mammal may be the carrier— possibly a bat which is symptom-free—making it difficult to determine the natural reservoir for the disease.

Throughout Crisis in the Red Zone, Preston pens powerful and graphic descriptions of the victims’ intense struggles—bleeding through every opening in the body, delirium as death draws close, blank stares, and mask-like faces hours before the end. While public health officials are unanimous that the 2014 epidemic was a natural occurrence, Crisis in the Red Zone illustrates the devastation possible if a bioterrorist attacked with a contagious agent.

Preston, the New York Times bestselling author of The Hot Zone, writes in a graceful and simple style, completely immersing the reader. I found myself unable to put Crisis down as I moved from chapter to chapter. All events are meticulously dated, both from 1976 and 2014, which I found extremely valuable in referring back to refresh details and follow events as they unfold. Preston writes as narrator in the first person, and in many instances he describes his interviews while conducting research in the cities of West Africa—a point of view I found particularly appealing.

Preston is known for his close attention to factual reporting, and Crisis is no exception. Especially when discussing events of 1976, he precedes his narratives with “maybe” and “might have” when exact accounts of past events are unavailable or recollections are cloudy. The reader can be sure Preston’s extensive research is impeccable, resulting in an absolute and accurate telling of the events.

In the end, the people of West Africa stopped the Ebola epidemic by altering their habits and customs. They modified funeral practices and how they prepared bodies for burial. They imposed a self-quarantine on their villages until infections subsided. All are lessons learned almost 40 years earlier while eradicating the world of smallpox—history repeats. We are seeing it again in 2020.

Reviewer: R. Scott Decker, PhD, is a retired FBI Special Agent with experience in violent crime, terrorism and physical security. His book, Recounting the Anthrax Attacks—Terror, the Amerithrax Task Force, and the Evolution of Forensics in the FBI, has won awards for non-fiction, true crime, and science and technology.