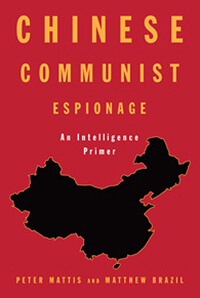 The emergence of the People’s Republic of China (PRC) as a superpower has posed major challenges for its intelligence services and those defending against them. Peter Mattis and Matthew Brazil have in effect written two books. The first part of Chinese Communist Espionage provides a detailed description and analysis of the evolution of Chinese intelligence, its leadership, and early spies. The second part employs case studies to address recent economic espionage cases and espionage activities during the early days of the PRC, as the country evolved into a regional and global power.

In reading through the cases, one is struck by the personalities and the diverse targets of their espionage activities. The cases emphasize the challenges security specialists face as Chinese intelligence selects new targets of opportunity. Some notable targets have been agricultural seed lines, military sensors, nuclear material, and cancer medication. In most of these cases the guilty parties were either fined, placed on probation, or given light sentences.

The authors contend that “…traditional spying has not gone away (and never will) though today’s headlines are dominated by cyber theft…. The most notable aspect of China’s recent operations is the integration of traditional human agents with capabilities in cyberspace.”

The concluding chapter discusses domestic surveillance, especially on minorities like the Tibetans and Uighurs. However, foreigners in China attract considerable surveillance “particularly journalists, diplomats, representatives of nongovernmental organizations, and those working for foreign businesses.”

This book will be of interest to the security specialist, and the cases will serve as a warning to those who must counter the threat of espionage. It will also be useful to those who are engaged in research on and teaching of comparative intelligence systems.

Reviewer: Dr. Stephen Sloan is a Professor Emeritus of the University of Oklahoma. He is also a longtime member of the ASIS Community on Extremism and Political Instability.