Book Review: Boko Haram: Security Considerations and the Rise of an Insurgency

Boko Haram: Security Considerations and the Rise of an Insurgency; By Ona Ekhomu. CRC Press; 294 pages; $61.95. 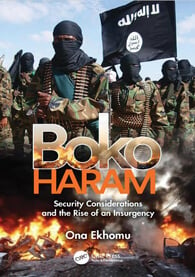 There are many books published on the topic of terrorism and certain terrorist cells. Boko Haram: Security Considerations and the Rise of an Insurgency explores this dangerous terrorist group with pinpoint detail from its inception and radicalization in 2002 to its reign as one of the world’s most ruthless terrorist organizations.

Author Ona Ekhomu, CPP, PCI, takes the reader on a guided tour of Boko Haram’s inner workings and violent, insurgent tactics, ranging from comprehensive improvised explosive devices (IEDs) to high-
powered assault rifles. These assertions are substantiated by unsettling figures of death and displacement of thousands of Nigerian people from their homes.

Chapter 4, “Prelude to War,” sums up this Jihadi group perfectly: Boko Haram “is a patient and purposeful enemy, it moves at its own pace, it executes its own agenda, and knows how to use deception to its own advantage.” Ekhomu also covers not only the ferocious nature of the Boko Haram insurgency but also how a lax local government and some local officials inadvertently became a catalyst to springboard this group from a radicalized sect to a globally intolerable extremist group.

Secondary research is invaluable when covering a broad perspective on terrorism; however, this book brings in firsthand research by an author who puts a whole new meaning to the phrase, “Know thy enemy.” Well written and accurate, Boko Haram: Security Considerations and the Rise of an Insurgency is not only a necessity for anyone who works or does business in Africa, but also a careful dissection of a figurative rattlesnake from fang to rattle.

Reviewer: Matthew Porcelli, CPP, has been in private security since 2009. He sits on the ASIS International Global Terrorism, Political Instability, and International Crime Council.