Force of the Future, Frustrated

However sophisticated military drones and artificial intelligence defense technologies have become, it still takes well-trained humans—both male and female—to sustain national security. So it follows that the national security of any nation suffers when its military has problems recruiting and retaining soldiers.

Such a problem exists for the U.S. military when it comes to female soldiers. In the 14-year period between fiscal years 2004 and 2018, women were 28 percent more likely than men to leave the U.S. military service, according to a comprehensive study recently released by the U.S. Government Accountability Office (GAO).

This low retention rate hinders the U.S. Department of Defense’s (DOD) strategic plan for building the “force of the future”—defined as an all-volunteer military which draws from the broadest possible pool of talent to defend the nation for generations to come. “Recruiting and retaining female servicemembers is important in order to more accurately reflect the nation’s population, ensure the strongest possible military leadership, and maintain and improve mission readiness,” the GAO found in the report, Female Active-Duty Personnel: Guidance and Plans Needed for Recruitment and Retention Efforts. 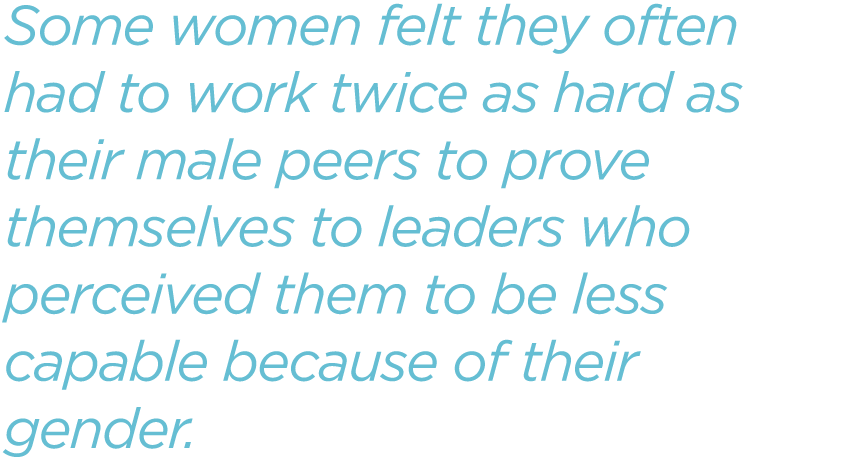 Although women make up slightly more than half of the U.S. population, the overall percentage of female active-duty servicemembers is much lower than that, and it has stayed relatively constant—increasing slightly from 15.1 percent in FY 2004 to 16.5 percent in fiscal year 2018, according to the GAO study. The U.S. Air Force was the branch of the military with the highest percentage of female active-duty servicemembers at 20.2 percent in 2018, with the Navy at 19.6 percent, the Army at 15.1 percent, and the Marine Corps at 8.6 percent.

The GAO found that the percentage of female active-duty servicemembers began to decrease after 10 years of service, leaving a smaller pool of female personnel available for leadership opportunities. This works against the DOD's goal of increasing female military leaders.

According to the RAND report, which focuses largely on the U.S. Coast Guard, the root causes driving low retention include experiences with poor leadership, a scarcity of female role models, and a perceived gender bias that makes female servicemembers feel less valued and not respected.

For example, some of the women who participated in the RAND study’s focus groups described ex­per­iences where they believed they were treated differently because of their gender or they were not offered the same career development opportunities by leadership as their male peers, Kimberly Curry Hall, a senior policy researcher at RAND and lead author of the report, tells Security Management.

“Some women felt they often had to work twice as hard as their male peers to prove themselves to leaders who perceived them to be less capable because of their gender,” Hall says. “Other focus group participants described experiences where some leaders created work environments that were hostile to women and actively excluded them.”

Other factors were concerns about sexual assault, stress related to perceived unfairness of weight standards and body fat measuring procedures, and burnout from feeling undermanned and overworked.

How can female servicemember retention be improved? A global view presents some possibilities, according to research prepared for the Defense Advisory Committee on Women in the Services (DACOWITS). The committee, which was established in 1951, provides advice and recommendations on issues related to the employment, recruitment, retention, and general well-being of the professional women of the U.S. armed forces.

DACOWITS commissioned a study in 2017 on the successful strategies that countries around the world used to attract and retain highly qualified female professionals in their respective military services. The resulting report—Foreign Military Strategies to Recruit and Retain Women, conducted by Insight Policy Research—discussed female retention policies for militaries of several countries, including Australia, Norway, and South Africa.

In Australia, the Australian Defense Force (ADF) has a stated goal of full gender equality in each service branch. Toward this goal, the ADF uses various measures to recruit and retain women, such as promoting the exciting lifestyle and opportunities available in the military, supporting women during the recruitment process, and minimizing the obstacles that military women sometimes encounter.

In addition, the ADF produces an annual Women in the ADF Report aimed at keeping the military accountable regarding recruitment and retention goals and gender-related issues.

In Norway, the military used unique female retention strategies such as unisex lodging and all-women training programs. Moreover, women have achieved the highest levels of Norwegian military leadership; since 1999, five women have served as Norway’s Minister of Defense. This has been an effective role modeling tool, the report found. The importance of role modeling also came up in the RAND study—the desire to be a role model to other women encouraged some focus group participants to continue their Coast Guard careers, Hall says.

In South Africa, the National Defense Force (SANDF) offers maternity leave with full pay for a period of up to four months. During this time, a woman on leave can still be considered for normal promotions. “Maternity leave policies are an important contributor to women’s retention in any workplace,” the DACOWITS report says.

In the end, Hall says that efforts to ensure women are represented at all levels can strengthen military services because organizations with a wide range of viewpoints in a positive work culture can foster creative ideas that improve operations.

“Individuals with different demographic background characteristics, such as different genders, can bring diverse perspectives to the workplace,” Hall says. “When these differences are harnessed effectively in an inclusive environment, it can drive innovation.”

Today in Security: Airstrikes in Yemen Kill at Least 70 and Cause Nationwide Internet Outage