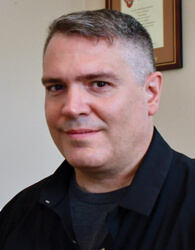 “Security chooses you.” Early in his career, Kevin Doss wanted to be a state trooper or secret service agent. “But life had other plans for me,” he says.

While serving in conservation law enforcement, Doss experienced a call to protect others. He transitioned to a role in security—first as a project manager for a financial institution and then for a major security integrator. His career developed there, as he earned a promotion and began working as a consultant on the integration side of security.

His ascent through the security ranks is marked by a firm devotion to constant self-improvement—which benefits the people his policies are designed to protect.

“In matters involving security, if you are not moving forward, you are falling behind,” he says. “Security is something bigger than self—a greater good. This fact cannot be overstated, as it drives the security professional to excel in making the world a safe place for all.”

And as Doss sought to improve his security practice, he found that ASIS International certifications provided a great way to learn while improving his career standing.

He joined ASIS and the Central Pennsylvania Chapter in 2002. Under the mentorship of Milton “Mick” Moritz, CPP, he decided to pursue the Physical Security Professional (PSP®) designation—and successfully passed the exam in 2003.

“Once immersed in the certification process, I realized that the real value of the program was not just the certificate, but rather the knowledge that it bestows,” he reflects. “It identified gaps in my security knowledge—that I didn’t actually know what I thought I knew. When my employers saw the results of my certification efforts and the relationships that I built within ASIS, they asked the entire division to join and offered to pay for their certifications as well.”

The certification process kicked off a life-long pursuit of professional development. Doss earned the Certified Protection Professional (CPP®) certification in 2005 and completed the Master’s of Security and Risk Management degree at the University of Leicester (United Kingdom) in 2009, the same year he founded his own security consulting firm—Level 4 Security, LLC.

As his career has continued to develop, Doss has sought to pave the way for security professionals following in his footsteps. Since 2008, he has served ASIS as the PSP Board Certification Review Program Advisor and lead instructor for both the online and in-person classroom programs.

He helped develop the PSP Virtual Study Group sessions that will begin in October 2020, and Doss will serve as the discussion moderator for that group of aspirants looking to earn their own PSP certification.

“ASIS board certification can open doors and differentiate you from other applicants and may increase your earning potential, but most of all, it can help you to become a better professional,” he says.

“Helping other security professionals achieve certification is a tremendous opportunity and responsibility for me. It is one way I give back to ASIS International.”