Book Review: Lead, Follow or Get Out of the Way 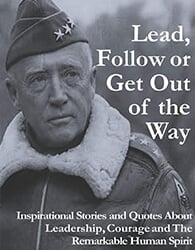 Lead, Follow or Get Out of the Way: Inspirational Stories and Quotes About Leadership, Courage, and the Remarkable Human Spirit. By Jonathan Rose, CPP, PCI, PSP. AuthorVista LLC; available from Amazon.com; 160 pages; $12.99.

It is said that war brings out both the best and worst in people. Using narratives from wars and other instances of upheaval, author Jonathan Rose, CPP, PCI, PSP, looks to some well-known and more obscure historical figures for leadership insights and inspiration in Lead, Follow or Get Out of the Way.

Most of the figures introduced have military credentials, whether the leadership skills under examination are those of Julius Caesar, Joan of Arc, or 12-year-old Seaman Calvin Graham. Graham served in the U.S. Navy in late 1942 and—in three short months—he was awarded the Bronze Star, the Purple Heart, and a Navy Unit Commendation before being arrested and discharged two days before his 13th birthday. While Graham undoubtedly is an inspiration, one can argue that Caesar, whose leadership skills were impressive, was also responsible for the deaths of millions of people and the end of democracy in ancient Rome. Regardless of your opinion of Caesar, there are reasons he is still studied some 2,000 years after his death.

This book consists of 11 chapters, each focusing on one positive character trait: courage, perseverance, faith, friendship, hope, duty, dedication, wisdom, honesty, determination, and victory. Each inspirational story is followed by related quotes from numerous individuals based on that chapter’s theme. Each story takes just a few minutes to read. The quotes that follow come from three sources: individuals from the arts, science, politics, sports, and business; anonymous contributors; and the author.

While this is not a security book per se, its focus on leadership is directly related to the management of the security function. Leadership is the key element that, along with training and communications, can bring out the best or the worst in people. While the book is short enough to read in a single sit-down, it is also filled with many observations and facts that give pause for thought long after, as well as reason to return to the book again and again.

Reviewer: Glen Kitteringham, CPP, has worked in the security industry since 1990. He is president of Kitteringham Security Group Inc., consulting with companies around the globe, and teaches security and emergency management courses at the University of Calgary and the Justice Institute of British Columbia.