The mounting physical impacts of climate change are beginning to press in on even the most mundane aspects of everyday life, ones almost every American takes for granted. Allowing for exceptions, your morning coffee was made possible thanks to the reliable operations of your local electric and water utilities. These systems that helped you bring the water to a boil, as well as those that ensured the water from your tap was safe to drink, were built in designated locations years ago, were designed for an entirely different climate, and selected through the massively complex process known as siting.

Siting in a Climate Change Context

Siting decisions involve the needs, values, and priorities of many constituencies and rule sets, and most often take several years and sometimes decades to resolve. For example, the proposed New England Clean Energy Connect transmission line was originally proposed to the U.S. Department of Energy in 2010. The goal was to move zero emissions, low-cost electricity generated by hydropower in Canada to Maine and other parts of New England, including power hungry Massachusetts. But Maine residents were fed misinformation by groups backed by the fossil fuel industry. Environmental groups also sought to block it as some segments would run through forested lands. And the whole project had to be re-engineered when New Hampshire state regulators, themselves subject to the messages hurled their way by varying interest groups including environmental advocates, voted to bar any development in their state of an earlier iteration of the project dubbed Northern Pass.

In 2021 and beyond, we now must factor in not merely all that, but depending on location and intended lifespan, decision makers must also consider present and looming physical risks infrastructures to include fires, storms, storm surge and flooding, drought, and rising air and water temperatures. For the still-skeptical, here’s just one data point: in the enormous insurance market centered in London, the number of extreme weather events affecting client organizations has tripled in the last 25 years, and the claims paid—adjusted for inflation—increased by a factor of eight.

Additionally, while people have always moved for several reasons, climate factors are already beginning to drive so-called climate migration. Planners of all stripes now must start preparing for waves of new arrivals and departures unlike anything they’ve seen before, and infrastructure must be sized—as much as possible—to be ready to meet rising and falling demands.

Depending on the location, size, and type of infrastructure to be built, a far-from-complete list of siting considerations, often with numerous stakeholders (e.g. the Federal Energy Regulatory Commission (FERC), city planners, electricity transmission and distribution operators, environmental advocates, business groups, citizens groups) quite often at odds with each other, would include:

On top of this, Congressional action is often required to change boundary lines, add easements, and deal with wilderness study areas or other protected federal lands.

Now imagine yourself in the position of the person in charge of the siting process at your city’s, state’s, or province’s public utility commission (PUC). In some regions, you may be seeing almost-daily reports of weather or weather-related events far—or very far—from what until recently was considered normal. You may have also noticed pandemic adaption-driven population inflows or outflows. How do you think this news might affect the siting process?

The Nation’s energy system is already affected by extreme weather events, and due to climate change, it is projected to be increasingly threatened by more frequent and longer-lasting power outages affecting critical energy infrastructure and creating fuel availability and demand imbalances. The reliability, security, and resilience of the energy system underpin virtually every sector of the U.S. economy. Cascading impacts on other critical sectors could affect economic and national security.

In mid-2020, I asked an East Coast PUC siting director: “How are you factoring in climate physical risks into your siting processes?” In this case, I was referring to higher temperatures, flooding from sea level rise, and worsening storm surge. His answer: “We’re making it up as we go along.”

We can all agree we want to do better than that. With some of the most important elements that undergird civilization, we must do better than that. The Center for Climate and Security Senior Research Fellow Kate Guy sets the table for bolder, vastly more proactive approaches in a Security Management interview earlier this year:

No planning process, no budget, no decision making, nothing across U.S. foreign policy should be done without taking into account climate and climate models. Where severe storms or hot temperatures are likely to occur—if you’re leaving that out of the equation, you’re going to be blind to what those plans put in place should include.

Some people are just starting to familiarize themselves with climate models—how they are made, what they can do, and how they are our best tool for understanding what’s coming at us in the coming years and decades.

Predicting the Future via Climate Models

In the United States, the leading institutions responsible for advancing global climate models are the Department of Energy (DOE) national labs, like Argonne in Chicago, Berkeley in California, and Oak Ridge in Knoxville, Tennessee. Beyond the DOE lab complex, the National Center for Atmospheric Research, or NCAR, is leading the charge. (If you’d like to dive in deeper, NCAR climate scientist Andrew Gettelman, along with University of Michigan Professor Richard Rood, wrote an accessible primer: Demystifying Climate Models.)

Outside government, some private companies are applying often-proprietary analysis to the data to produce actionable business intelligence for insurers, real estate developers, and others. Some of the first of these are FourTwentySeven, CAPE Analytics, and Jupiter Intelligence. Larger companies like McKinsey and ICF, and major universities like Carnegie Mellon, Columbia, and Princeton are also extremely active in this space.

To be useful, regional global climate model data must be diced into smaller geographic and time segments via a process called downscaling, or in other words, the process by which large-scale climate models are leveraged to develop climate predictions at finer temporal and spatial scales to fit the purpose of local level analysis and planning.

Let’s say you’re considering putting a new electricity substation close to the coast in New Jersey to replace one that’s been in operation without major modifications for several decades. You need to know not just what the weather has been like near that site in recent years, but also what it’s projected to be like in coming decades—at least to 2050. And depending on proximity to the Atlantic Ocean, and its elevation above current sea level, you would also want to know how soon sea level rise will begin to impact the area—if it’s not happening already. Were you to learn that the site will likely be out of acceptable reliability and safety parameters within the next 15 to 25 years, you would likely want to relocate this substation or recreate its functions elsewhere.

Back to what’s on the table of the poor PUC siting division director, and what kinds of asset placement decisions he or she must adjudicate over. In the electric sector these days the list includes generation, like large wind, solar, and storage farms, as well as natural gas plants and—possibly in the future—small modular nuclear reactors. There’s also transmission and distribution, which involves not just lines of various voltages, but transformers in substations to step voltage up or down as required. Often, it’s the transformers and other supporting substation equipment that takes a beating in storm and flood events.

And don’t forget that in the United States more than one-third of all electricity generated starts with natural gas arriving at the plant via an elaborate network of pipelines and pumps. In the water sector, some of the most important elements that comprise water and wastewater treatment plants are storage wells and reservoirs, mixers and aerators, and of course, innumerable pumps and pipelines.

All of these components have to go somewhere, and—allowing for maintenance downtime—be ready to play their role for a minimum of several decades, if not longer. When things go wrong, as was seen in the February freeze in Texas and the Colonial Pipeline ransomware attack, businesses stall and citizens struggle merely to go about their lives. So, with climate-induced weather departures from previous norms, choosing the most reliably hospitable location for the assets we depend upon has become even more important, and vastly more difficult, than ever before.

In coordination with other labs, industry, and academia, one place that’s aiming to improve the odds of success for siting directors everywhere is Idaho National Laboratory. Now under development, the Climate-Informed Infrastructure Resilience Engineering (CIRE) methodology will help PUCs and other siting decision stakeholders ingest downscaled climate model data, paired with a suite of protective and adaptive engineering decision tools, to identify the highest confidence candidate locations. 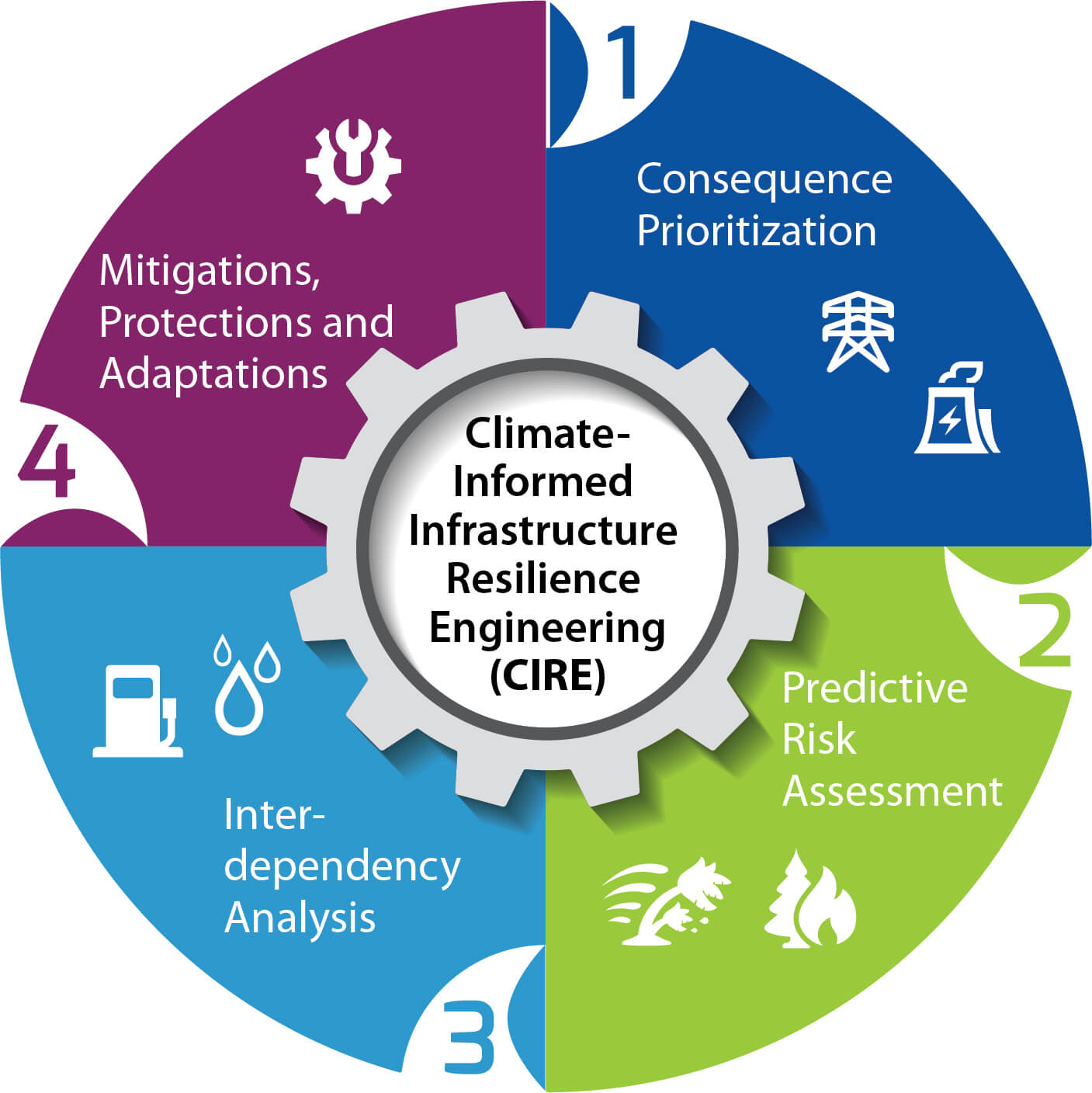 The methodology will consider many static and dynamic variables, and present information to decision makers in a form that’s readily understood and actionable. Taking feeds from all other parties involved in siting recommendations, for brevity’s sake, the following is a substantially simplified workflow that adds the present and future climate risk layers:

The current U.S. administration, DOE’s national lab complex, and large portions of industry and academia are working on new policies and technologies to help curtail greenhouse gas emissions. But the other grand challenge that must be tackled is ensuring that the critical infrastructure that undergirds civilization, including the economy, national security, and public health—not to mention your daily cup of joe—will continue to function the way it must. This includes not just what’s already built, but what will be sited in the near and mid-term future, in the United States and around the world.

Andy Bochman is senior grid strategist, National & Homeland Security at the Idaho National Laboratory (INL), where he provides strategic guidance on topics at the intersection of grid security and infrastructure resilience to senior U.S. and international government and industry leaders. A non-resident senior fellow at the Atlantic Council’s Global Energy Center, in early 2021 he published his first book: Countering Cyber Sabotage: Introducing Consequence-based Cyber-Informed Engineering. Bochman began his career as a comms officer in the U.S. Air Force, and prior to joining INL was the energy security lead at IBM. Bochman received a BS degree from the U.S. Air Force Academy and an MA from Harvard University.