Terror in Europe: Attacks Decline in 2019

Europol published the European Union Terrorism Situation and Trend Report 2020 (or TE-SAT 2020), which examines and quantifies terrorist attacks and arrests in EU countries that occurred in 2019. There were a total of 119 attacks and 1,004 arrests in 2019. This compares with 205 attacks and 1,219 attacks in 2017, and marks two straight years of declines in both categories. 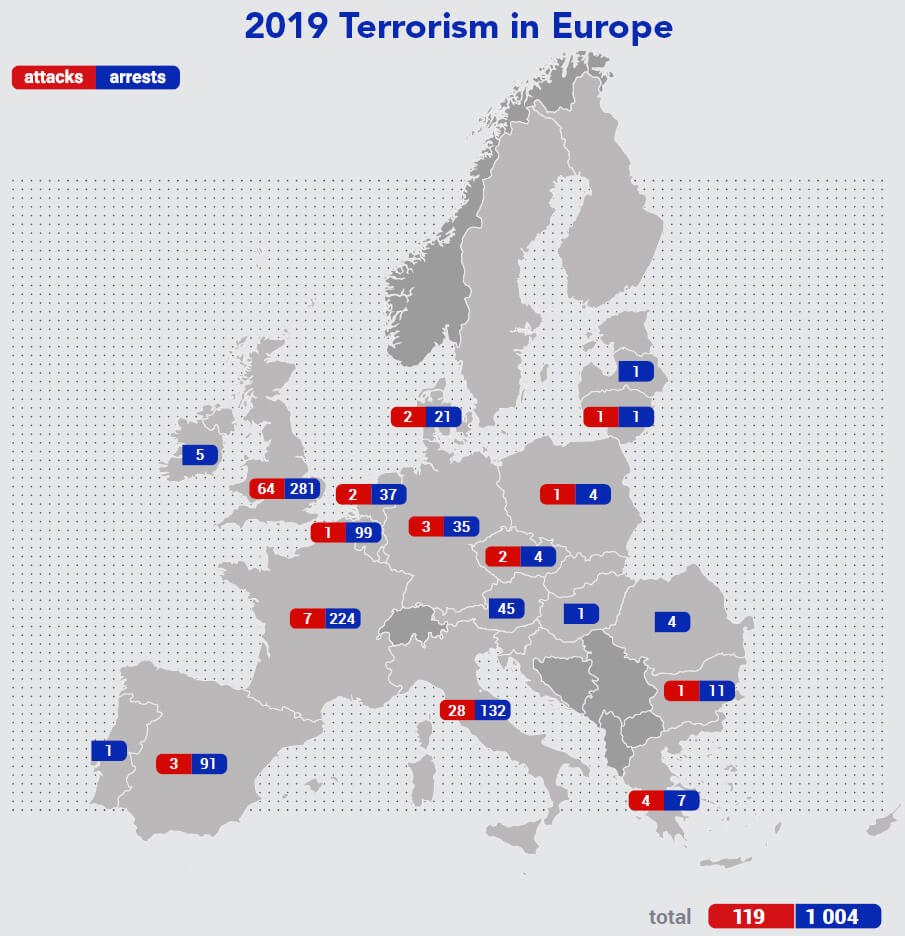 The report also concludes that lone actors or small cells who plan terrorist attacks without direct input from larger organizations is a greater threat than more coordinated attacks, which are more likely to be noticed and intercepted by law enforcement. Traditionally, both right-wing extremists and jihadists promote remotely planned and operated attacks.

In general, firearms and explosives are the preferred methods used by ethno-nationalists and separatists, as well as right-wing extremists. Jihadists plots also included firearms and explosives, in addition to bladed attacks. Left wing extremists and anarchists prefer improvised explosive devices and improvised incendiary devices. According to the report, lone-acting jihadist terrorists continue to pose the biggest risk to Europe as they tend to plot explosive attacks in crowded areas aimed at causing the maximum damage to civilian populations and targets.

“In the first months of 2020, lockdown measures introduced to combat the spread of COVID-19 could further escalate some of the trends identified in the TE-SAT, given the potential economic and social impact of the pandemic worldwide,” Catherine De Bolle, executive director of Europol, writes in the letter introducing the report. “These developments have the potential to further fuel the radicalization of some individuals, regardless of their ideological persuasion. Activists both on the extreme left and right and those involved in jihadist terrorism attempt to seize the opportunity the pandemic has created to further propagate their aims.”

More on security and terrorism from the pages of Security Management magazine:

“Fatalities from Terror Attacks Continue to Decrease” – In the last five years, deaths from terror attacks worldwide decreased more than 50 percent, yet terrorism remains a problem in many countries. March 2020

“The Threat Comes Home” – When the Islamic State appealed for recruits, thousands answered the call. What happens when they return home? September 2019

“Extremist Attacks Rise as Polarization Increases” – Attacks by far-right extremists, often difficult to detect, seem to be on the rise worldwide. June 2019