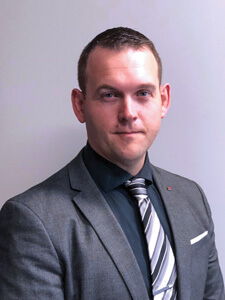 Jean-Charles Gris, CPP, attended his first ASIS annual meeting free of charge, as an inaugural recipient of the ASIS Young Professionals (YP) Council Experience Award in 2014. Five years later, his company created a program to reimburse managers for their ASIS membership—and in some cases sponsor their GSX attendance.

Gris was a police officer with France’s National Gendarmerie before moving to Montreal, Canada,​ in 2005. Alongside this geographical leap, he also leapt into a private security career—and immediately took a liking to this new line of work. “It was greatly satisfying to make a significant difference in my new roles,” he says.

He began attending the University of Montreal in 2006—a move that would kick off a flurry of career advancement. By 2013, he had earned his bachelor’s degree in Human Science and his master’s degree in Criminology, joined ASIS International at the suggestion of a professor, become secretary for the ASIS Montreal Chapter, and climbed from a role as a security officer to the position of public security manager for Saint-Laurent, Montreal’s largest borough by area.

Not one to rest on his laurels in the dynamic world of security, he sought to add an ASIS board certification to his résumé. He set his sights on the Certified Protection Professional (CPP®) designation.

“By nature, I’m a security generalist, not a specialist,” he explains. “I’ve occupied different security management functions and was able to overperform because I have accrued extensive knowledge in many security fields. Therefore, the CPP was a perfect fit for me.”

When he earned his CPP in May 2015, he was ASIS Montreal Chapter chair. He continued his ascent through the ASIS volunteer ranks; in 2017 he became regional vice president for Region 6A—encompassing eastern Canada—and joined the ASIS YP Council. He was named vice president of operations for SECURITAS Transport Aviation Security (STAS) later that year.

“SECURITAS has been a strong ASIS supporter for decades and sponsored my annual meeting attendance through the YP Experience Award years before I became their employee,” he notes. “I’m now in the position to return the favor and be a contributor to the development of our managers.”

Under Gris’s new ASIS International Program, qualified STAS operations managers are eligible to apply for reimbursement of their ASIS membership costs—and four of these managers will have their costs covered when they join Gris in attending GSX in Chicago this September.

In the first half of 2019, qualified managers took advantage of this program, and Gris expects the program to grow in its second year. In addition to becoming members, some managers are taking on volunteer roles within ASIS as well.

“I’m thrilled to witness the benefits that education initiatives like our ASIS International Program bring,” Gris adds. “Return on investment does not occur in one day—but the growth our managers experience by interfacing with the greater security community is tangible.”