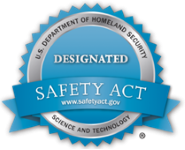 The ASIS certification program is the first and only program of its kind to be awarded a coveted Designation by the U.S. Department of Homeland Security (DHS) under the Support Anti-Terrorism by Fostering Effective Technology (SAFETY) Act of 2002.

What is the SAFETY Act?

The purpose of the SAFETY Act is to ensure that the threat of liability does not deter manufacturers of anti-terrorism technologies from developing and commercializing new products that could significantly reduce the risks or effects of terrorist events. Companies that supply products and services that can be used to detect, defend against, or respond to acts of terrorism can apply for and receive coverage under the law.

Although this legislation was largely intended for product manufacturers, ASIS took the unprecedented step of convincing DHS that the legislation also should apply to non-traditional products and services, specifically ASIS guidelines and certification programs. This groundbreaking initiative on behalf of ASIS members and other security practitioners has had beneficial outcomes in both arenas, with guidelines receiving the SAFETY Act Designation in May 2005 and certification in July 2006.

What does this mean?

The SAFETY Act Designation gives ASIS board-certified professionals, their employers, and their customers immediate protection from lawsuits involving ASIS certification and the ASIS certification process that arise out of an act of terrorism. Not only does it limit the types of liability claims that can be brought against a certificant, but it also entitles the certificant to immediate dismissal of those specific types of claims. Employers of ASIS certified practitioners also gain protection against terror-related liability claims that can include a presumption of dismissal from a lawsuit.

For example, if a chief security officer (CSO) at an industrial facility destroyed in a terrorist attack is a CPP, claims alleging that the CSO’s certification was insufficient should be dismissed immediately. The reason they would be dismissed is because ASIS certifications are covered under the scope of the SAFETY Act protection.

SAFETY Act protections apply to both the public and private sectors.

What does this mean for employers of ASIS board-certified personnel?

In addition to the many benefits of having ASIS board-certified practitioners on staff, the scope of liability protection granted by DHS is a significant corporate benefit that can be used as an integral part of business strategy.

While the SAFETY Act will not prevent all terror-related claims against employers of personnel holding an ASIS certification, it should limit the types of claims that can be brought against them, thereby reducing the threat of onerous lawsuits.

How does this impact non-U.S. practitioners and non-U.S. companies?

Of importance to non-U.S., ASIS board-certified practitioners is the fact that liability protection under the SAFETY Act extends to non-U.S. soil. Specifically, acts of terrorism that occur on non-U.S. soil may be covered provided those acts cause harm in the United States. For instance, the Department of Homeland Security states that financial harm caused by an act of cyber-terrorism is included in its definition of “harm.”

Please feel free to pass this information along to colleagues in your organization who should know about this liability protection.

If you have questions about the SAFETY Act and its application, please e-mail [email protected].