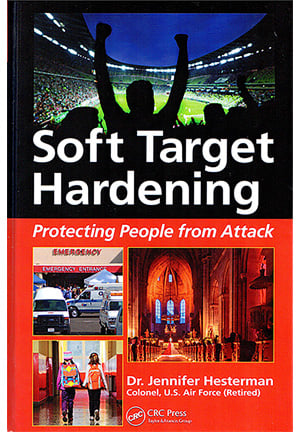 2015 Award Winner of the ASIS Security Book of the Year

Terrorist attacks occur daily and are increasingly being aimed at civilian populations around the world. Battlefield lines have been redrawn to include churches, schools, hospitals, and malls. This breach of moral boundary is shocking and invokes fear—two primary goals of terrorism.

Although there is an increase in soft target activity—or attacks on places of worship, study, and leisure—there is hesitation to explore such susceptibility in the United States. Soft Target Hardening: Protecting People from Attack starts the national dialogue by providing case studies, best practices, and methodologies for identifying soft target vulnerabilities and reducing risk in the U.S. Offering deterrence and mitigation techniques from more than 275 sources, this comprehensive book:

This book is a must read for those who secure, own, and operate soft target facilities, and for citizens who want to protect themselves and their families from attack.

Dr. Jennifer L. Hesterman, US Air Force (Retired), was commissioned in 1986 as a graduate of Air Force ROTC at Penn State University. During her military career, she served in three Pentagon tours and commanded multiple times in the field. A cleared professional, she is an advisor for Watermark Risk Management International, a senior analyst for the MASY Group, on the Advisory Board for the Government Security Conference, and a member of the ASIS Crime and Loss Prevention Council. Dr. Hesterman holds a doctoral degree from Benedictine University and master’s degrees from Johns Hopkins University and Air University.